Kit of the Month

Sorry this is a few days late!

Kit of the month for September is the Fuchsia. 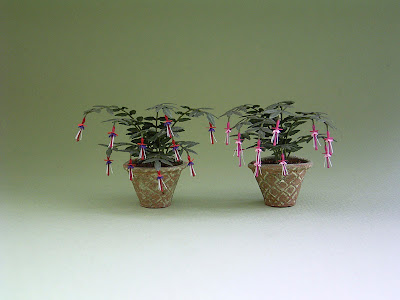 There are two colours to choose from red/purple or pink/cerise. To finish this kit you will need paint and an old toothbrush!!

I'll be back next month with another kit and another giveaway........see you then.
Georgie


I wasn't going to say anything, but a comment left on facebook  after the last giveaway has really upset me and I've decided that it's better to have my say than let it nag away at me.
Believe it or not the winner of the last giveaway was the same person who won the giveaway of the potting bench last year.
I didn't realise until I messaged her on facebook and saw her previous messages......to say I was amazed was an understatement....what were the chances of that happening?
But her name was drawn fairly and squarely, so I wasn't going to change the winner.

Then the comment on Facebook......saying in effect could this be possible? was it really chance?

I'm just wondering what possible advantage it could be to me to have the same winner? If I knew Sabrina (the winner) I could have just sent her a Wisteria kit as a gift. To say that I am really affronted that someone has called into question my honesty and sense of fair play is an understatement!

I replied privately to the commenter on face book, and as far as I'm concerned this is the end of it.

The winner of the Wisteria kit is.......
Sabrina Sagliocco who left a message on facebook.

And sorry to everyone else, but thank you for entering.......I'll do another giveaway in October.
Posted by Georgie Steeds at 09:07 11 comments:

Promote your Page too